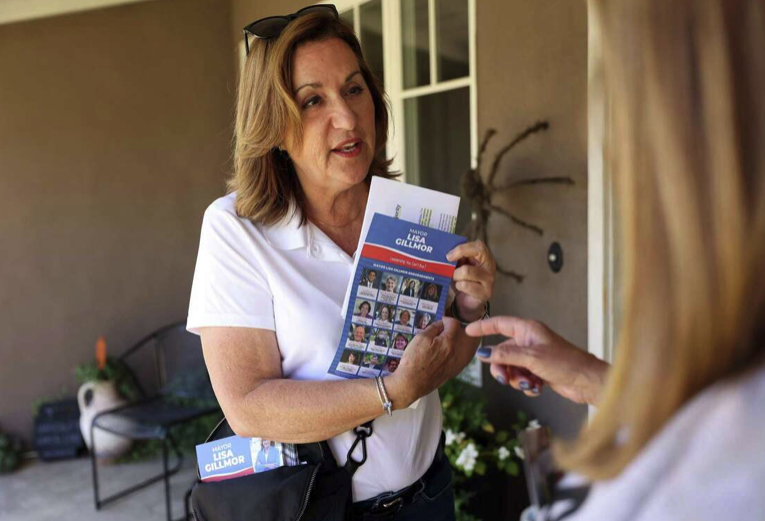 For some longtime Santa Clara residents, the outcome of the Nov. 8 election could cement a new and controversial nickname for their city: “Yorkville.”

The name refers to Jed York, CEO of the NFL’s San Francisco 49ers, who has poured more than $3.8 million into the elections for mayor and City Council through the sports franchise and its related entities.

York has long supported his preferred candidates in Santa Clara, where he has frequently clashed with Mayor Lisa Gillmor over operations at Levi’s Stadium, the team’s publicly owned home. But the scope of the onslaught in this year’s election has upped the ante as York seeks to oust Gillmor and re-elect two of his preferred council members.

So far, the team has spent about $68 per registered voter in Santa Clara — an unprecedented amount for the eighth – largest city in the Bay Area, where local candidates typically spend well under six figures to get elected.

Carolyn McAllister, a retiree who’s lived in the city for 48 years, said it’s unlike anything she’s seen in decades of being involved in Santa Clara politics. She said it feels as if the city is deciding between local control or becoming a “company town” run by one mega-corporation.

“In my mind, if it continues this way, Jed York will be dictating what happens in Santa Clara,” McAllister said. “There won’t be self-governance if that happens — there won’t be.”

Residents critical of the team’s spending say it’s a brazen attempt to buy an election, driven by the team’s interest in controlling management of the stadium and its reluctance to pay costs for city services, such as police on game days.

The relationship between the team and a bloc of 49ers-friendly council members has drawn extra scrutiny in recent weeks after a Santa Clara County civil grand jury released a report that concluded those officials “effectively breached” their duties to the city and may have violated ethics laws.

But the 49ers and Gillmor’s opponent in the mayoral race, Council Member Anthony Becker, counter that the race has falsely been framed as a contest about the team’s interests. They argue Santa Clara is moving toward a new, more diverse generation of elected officials, replacing an “old guard” that is largely white and tied to developers.

“It’s about time that Santa Clara has fresh leadership moving in the right direction,” said Becker, who was elected to the council in 2020 and works as a content moderator for a tech company. Gillmor “is actually the last member of the old guard to be on the City Council. It’s a toxic cloud.”

Money from the 49ers has come in the form of independent expenditures, indirect spending to boost Becker and its chosen council candidates that isn’t subject to campaign contribution limits. The team’s millions have paid for a flood of television and social media ads, as well as print ads piling up in voters’ mailboxes.

While professional sports team owners regularly make large political contributions, a team spending so heavily to try to tip the scales in one city, with a population of about 127,000 residents, is highly unusual.

But the spending might not be entirely surprising considering the bitter feud between the 49ers and some Santa Clarans that ignited soon after the team’s gleaming Levi’s Stadium opened in 2014.

There have been many twists and turns in the shaky relationship between the 49ers and the city officials. But one primary conflict stands: The stadium was supposed to generate revenue to enrich the city as well as the team.

City officials have previously accused the team of not providing Santa Clara with its fair share of the revenue. The city’s Stadium Authority owns the facility and leases it to the 49ers, who manage it.

After relations soured, York started wading into city politics more aggressively. In 2020, the 49ers and York spent about $2.9 million to elect a friendly majority to the City Council; that year, three of his four preferred candidates won. Gillmor has since been in the council minority, often overruled, 5-2, by the new majority.

The new majority on the City Council has since fired the city manager and the city attorney. In August, the council agreed to settle its lawsuits with the 49ers over management of the stadium for $1.6 million.

Gillmor, who has been the primary target of negative ads funded by the team, said the pro-49ers majority, including Becker, has given the team everything it wants. Becker said he is not beholden to the team but believes a better working partnership benefits the city and prevents expensive lawsuits.

Now, Gillmor said York is trying to snuff out remaining opposition at City Hall. She and Council Member Kathy Watanabe, whose seat is not up for re-election this year, is part of the minority of city leaders who are often critical of the 49ers and who don’t meet with team lobbyists.

“Instead of paying the city what they owe us, they’re spending money stacking the council for themselves,” Gillmor said. “It’s a complete and total potential takeover of our city, right out in the open.”

Gillmor, a real estate broker and longtime former council member, was appointed mayor in 2016, after her predecessor resigned, and won a full term in 2018. Twelve years ago, she helped York pitch voters on plans to construct $1.2 billion Levi’s Stadium.

She said if the 49ers get what they want in this election, Santa Clara will become a “company town model” for sports teams or other special interests that want to control local governments.

Council Members Karen Hardy and Raj Chahal are running to retain their council seats this fall, with backing from the 49ers. They face two political newcomers backed by Gillmor: Larry McColloch and Christian Pellecchia.

Rahul Chandhok, a spokesperson for the 49ers, said in a statement that the team is “proud to have consistently supported diverse candidates who are committed to solving Santa Clara’s most pressing problems like housing affordability, and who have championed voting rights in the city.”

Gillmor has faced criticism over her role in a Voting Rights Act dispute,when she supported an effort to defend the city’s former at-large council district system. A lawsuit, filed by five Asian Americans, alleged the system diluted the influence of voters of color.

Santa Clara was forced, by court order, to divide the city into six council districts. Gillmor’s opponents have hammered her after the city spent $6 million fighting the case over four years. Many cities across California have made the same move to district elections due to lawsuits over the last decade.

Becker said those districts have allowed the city to elect people of color and upend the status quo at City Hall. If he defeats Gillmor, Becker would be the city’s first openly gay mayor, and one of a few LGBTQ mayors in the Bay Area.

Becker said he’s also concerned about the 49ers’ flood of spending in city elections, but stressed that he never asked for the team’s support. He said this election is about moving on from the 49ers feud, so the city can focus on issues like housing. The team hasn’t contributed directly to Becker’s campaign, and election law prohibits candidates from coordinating with independent expenditure groups.

“I have no control over that,” he said of independent expenditures. “For 10 years, it’s been about the 49ers. The rest of our city has been suffering.”

Becker and Gillmor have regularly traded personal barbs during the campaign. He accused her of being “homophobic” for not more swiftly denouncing antigay comments posted about him on a blog. She called the police and accused Becker of bullying after she said he cursed at her and another council member and made an obscene gesture during a closed council meeting in August.

Both deny the accusations against them.

But the campaign has been shaken up in recent weeks due to the civil grand jury report, which raised concerns about Becker and other 49er-friendly council members’ close ties to the NFL team. The report rebuked five council members who the jury said regularly “put the 49ers’ interests ahead of the city’s interests.”

“Because of the large number and systemic nature of these closed-door meetings with lobbyists,” the report states, “the Civil Grand Jury is concerned about transparency and whether the 49ers’ lobbyists are dictating City/Stadium Authority policy to the detriment of the residents.”

Becker, and the other council members, have disputed the report. Becker said the jury did not interview him, and that its report contained numerous discrepancies. He alleges Gillmor “weaponized” the grand jury behind the scenes.

For McAllister, the longtime Santa Clara resident, all the drama and special-interest spending has become too much. She’s now helping to organize a recall campaign targeting the other 49ers-friendly council members.

“We’re a laughingstock now in other cities,” she said. “It’s absolutely embarrassing.”